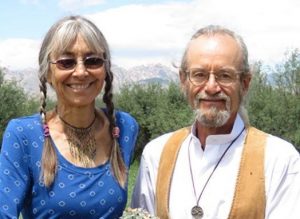 Matthew Kent and Anne Zapf have been life companions for over forty years and together with Rev Immanuel Trujillo founded the Peyote Way Church of God in Klondyke Arizona in 1978. The three have argued in federal court that the laws regarding Peyote are discriminatory and because of negligent federal management and extinction prices the Holy sacrament in its native environment is threatened. Multicultural Religious Peyote use is legally protected in a handful of states, AZ, NM, CO, UT, OR, NM, and NV. The protection of the Holy Sacrament Peyote and its cultivation in Arizona has been a project that started after the Church lost its suit against Texas for its the discriminatory laws denying the Peyote Way Church the same access to Peyote where it grows in South Texas as members of the Native American Church.

Matthew and Annie met in 1976 and were married six months later, were unjustly arrested during their honeymoon in Costa Rica for trafficking Marijuana, and upon their release and return to the United States pledged to seek a spiritual path in the United States where the laws would protect them. A year after they met and experienced their “honeymoon” they found themselves in Southeastern Arizona with Immanuel Trujillo. Together they grew the Church as a service organization, achieved tax-exempt status and began the long path towards recognition.

Annie’s speech describes the spirit walk process of the Peyote Way Church, followed by comments on long term effects and recommendations for bringing the wisdom from within awakened by the Holy sacrament Peyote into the outer world and our daily lives.

Rabbi Kent’s speech gives a brief history of the Church, including the church suing the State of Texas and the Federal government for their discriminatory Peyote laws. Since the Church’s inception in 1977, Church officers have been conducting Spirit Walks and serving non-Native Peyotists while pursuing a cooperative spirit with Native Peyotists and Native American Churches. Sometimes a loss is a win. After losing our Federal suit the Church turned its focus to Peyote propagation and our focus has been starting Peyote seedlings and building and filling greenhouses with Peyote plants.